I’m currently trying to get a video of the last demo online and all things considered, it has been a good experience… except for Apple’s Safari browser. It’s nice that they support the video tag, but their implementation is pretty much useless:

As you may have noted, the formatting on my older posts has been lost, because Blogger wouldn’t let me edit my HTML without adding additional linebreaks unless I disabled them in both HTML and Compose view, which also effected existing posts (which I didn’t notice until it was too late). I’ll try to rebuild the posts ASAP. 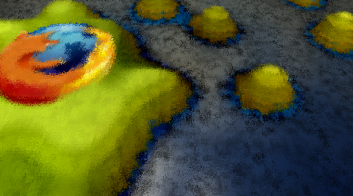 When font-face made it’s appearance in all major browsers I was really, really excited. Until I learned that I wouldn’t be able to use any commercial fonts and even most free fonts. So I’ve started working on my own. It’s terribly basic and isn’t even complete yet, but I thought that maybe some people could even have use for an incomplete font. It is currently available as an SVG containing the letters A-Z, a-z and the numbers 0-9.

schmucker-sans-nothrills-rev0 is built from first principles: Lay out a grid for your letters, create one arc for the round parts and try to assemble all letters from these parts. It’s not exciting, but it should be easily readable so you can also use it for longer text paragraphs, not just headlines.

The most interesting thing is probably the license, which allows for pretty much anything. I’m putting this into the public domain.

So, create fonts or use it in your logos or basically do whatever you like. Would be nice if you sent me a mail though. 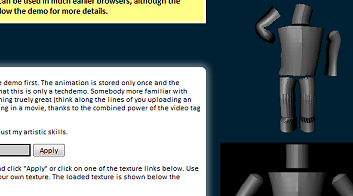 It’s probably best to let you play with this little demo first. The animation is stored only once and the texture is applied dynamically. Keep in mind that this is only a techdemo. Somebody more familiar with animation could use this technique for something truely great (think along the lines of you uploading an image of yourself and suddenly you’re appearing in a movie, thanks to the combined power of the video tag and this).

The technology is not the limiting factor here, just my artistic skills.

.. .is actually pretty simple. An animation is rendered with a placeholder, instead of a real texture. This placeholder contains the position in the texture (encoded as color). Specifically, the model was rendered with this texture, using a planar projection for UV coordinates.

When the animation is shown, the pixels get replaced again with pixels from some texture that the user or the developer specifies.

All this can be done with SVG filters, specifically feDisplacementMap. If you want to know in detail how it’s done, have a look here. The only real difference here is that instead of a static map, a series of images is composed into an animation.
You may also want to look at the source of the demo. Everything needed to recreate the effect shown here is marked with the keyword IMPORTANT.

Can only Firefox 3.5 do this? And why aren’t you using the video tag?

Most modern browsers can do this, but there are a few differences that you should be aware of: To make this work, your video has to be stored in a lossless format.

For Gecko based browsers that’s usually APNG in an IMG or maybe at a later time Theora (the current encoders don’t allow for for lossless YUV compression, but that’s likely a limitation of the current tools, not the format, as we’ve seen with JPEG or h.264) via VIDEO. For Webkit it’s lossless h.264 and for legacy browsers it may be a greyscale GIF containing the color channels side by side, so they can be recombined by the filter.

Older browsers also need the filter applied inside an SVG document, so you’ll have to load an SVG in an iframe to do the rendering.

To sum it up: This demo only works in Firefox 3.5 because I didn’t want to spend more time optimizing it. I wanted to show you what can be done and Firefox 3.5 made it easiest for me. But you can make it work. For a few pointers, see this file, which implements a similar solution in pure SVG.

Sometimes working on a production website reminds you of problems you thought that were long gone. In this case, I needed smooth image scaling for the majority of browsers and yes, that sadly still includes MSIE6 and Firefox2.

The solution for MSIE6 is pretty well known, so I’ll keep this short: You need to apply the AlphaImageLoader with sizingMethod scale:

Firefox2 is actually more difficult here. There are no hidden properties or anything that will magically render your image smoothly. But there’s another way to do it. Namely, the SVG renderer, which uses smooth image rendering by default. So you simply need to link in an SVG via the object tag instead of the image:

If you want to automate the whole thing, the easiest way is using data urls, because it means that you don’t have to create separate documents. Instead you just let a script run over the page and replace the imgs with objects. The only real difference with data urls is that you have to urlencode the characters, which makes the final object tag something like this (without any linebreaks):

That’s pretty much it. Now I’m off to investigate Safari and Opera.

I just had to play with SVG filters a little more.

You’ll find instructions on how to do this in the previous post, but this is maybe a better example for what you can do with it: